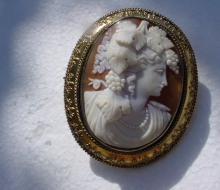 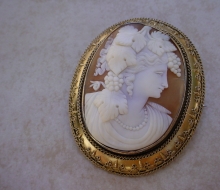 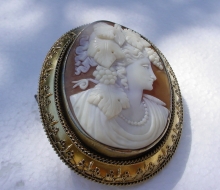 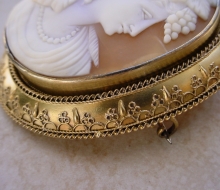 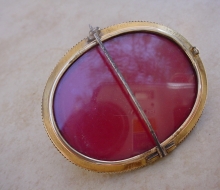 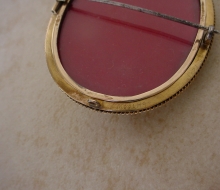 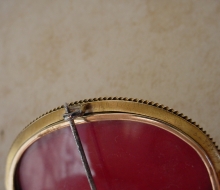 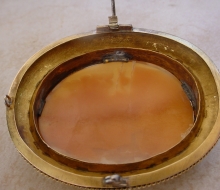 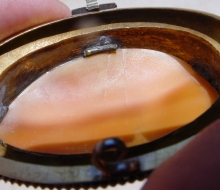 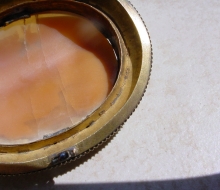 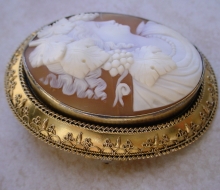 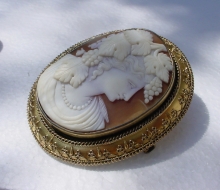 Offered here an absolutely beautiful mid 19th century brooch set with an artistically carved, museum quality shell cameo. These antique cameos are truly works of art and craftsmanship. I have been admiring these museum quality cameos for some time now. While there are lots of old and new cameos on the market one needs to differentiate between the common cheap versions and true works of art. Once you zero in on the top quality ones you will find that some pay most attention to the cameo carving and less on the metalwork framing the cameo, while others also show much of the virtuosity in the goldsmith’s work. This is an example you are looking at here. The cameo showing the image of Bacchante is masterfully carved. Judged by the proportions, the delicate treatment of the facial features, the hair, the pearl necklace and the grapes and grape leaves. Now we move on to the gold work itself. One really has to know what one is looking at to fully appreciate the work involved here. The brooch which measures 62 mm by 51 mm has many parts that had to be formed and then soldered together. The oval piece of gold to which most other parts were soldered to, had to be cut and slightly domed first. On the inside and outside edges of it the goldsmith added some spiral elements made of twisted gold wire. This was quite common design element used for cameo frames. There are 5 twisted wire spirals here!! The treatment of the gold in between is what is so amazing here. In the area between the spirals there is a decorative motif made up of 190 separate little parts. Each tiny part cut and formed by hand, laid out on the sheet of gold and soldered onto it. When you solder small parts of gold on top of other parts you discover that the small parts tend to flow on the surface of the molten solder. It is really difficult to keep them in place when the solder is in the flowing state. How someone was able to keeps all these tiny parts in place with such precision is amazing!!! The back of this brooch is closed with a separate gold frame which holds a piece of glass. Once removed you are able to see how the main pieces of this brooch were soldered together. You will also notice that the last pieces of gold to be soldered were those pieces of gold wire holding the cameo in place from the back side. Those were soldered using lead solder because of it’s low temperature melting point. Once the cameo is in place one cannot use the high heat used for gold solder. On the front side the cameo is bezel framed and a lip is beveled down to enclose the cameo in the front. This was done prior to final setting of the cameo in. On the back side of the frame there are two sets of numerals and letters. This was undoubtedly makers signature. The brooch weighs 29.3 grams total weight. The gold was tested as at least 14K gold using an acid test with a touchstone. The gold may be 15 or 16 karat. The pin in the back is white metal and may actually be steel, this judging by some surface corrosion. There is also a ring at the top of the back side. One can have a bail added to it if one wants to wear this piece as a pendant. This is a piece of art you should be proud of owning and something which may increase in value. Have a nice frame made for it and exhibit it in your home with nice lighting as you would for a painting.

I FINALLY got a custom-made deployant buckle from Igor, 18K WG with my choice of engraving, and I was THRILLED with the result — prompt, honest, courteous service. I recommend him without reservation.

I bought 2 watches from Igor over the past 6 months and it is a pleasure to deal with him. Igor is knowledgeable, accepts all questions and always replies quickly. I recommend him for sure

Just completed a deal on a 1680 as an international buyer with Igor at www.afinewatch.com . He maintained great communications, had a polite and informed manner and came through with a nice watch for the cash I paid. A trustworthy guy…….!

Just completed a deal with Igor, and may I say It couldn’t have gone smoother. Delivery from the US to the UK was simply stunning. Have no worries dealing with this gentleman.

Completed a very smooth transatlantic deal with Igor. he goes the extra mile for his customers,very professional. kind regards.

Igor is good as gold ( no pun intended, well maybe a little one)

I recently purchased a gold GMT from Igor and both the watch and communication with Igor were top notch.

no issues with Igor.
Have bought 1803, Bubbleback and WG 18239, all working well.
Great communication, reliable and dependable.
Good luck